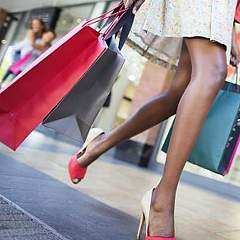 by MapCop
America's department stores have had a rough few years, thanks to a sluggish recovery in consumers' purchasing power and the increasing adoption by brands of business models that don't involve them. One of the ways in which they have fought back is aggressive discounting, selling products from well-known brands at prices far below the suggested retail price.This is good for the department store, but bad for the brands whose products are being discounted. Luxury labels rely on high prices to maintain an exclusive image. If they become known as “sale brands”, that image can be irreparably damaged as wealthy consumers move on to alternative labels. Even periodic discounting can train consumers to wait for deep sales, making them less likely to buy your products from non-discounting retailers or directly from your own stores. Luxury retailer Michael Kors felt the impact of this in 2016, when a large number of Nordstrom stores opted to stop carrying their products rather than fight a losing price war against the extreme discounts available at Macy's. Effectively, the discounted price was becoming the prevailing price of Michael Kors handbags, causing terrible damage to their brand image. As early as 2015, sector analysts were predicting the death of the brand due to its oversaturation in the market.

Department Stores Can Be a Real Threat

Department store discounts can be a far bigger threat to your brand than anonymous online resellers. Many people are understandably suspicious of cheap pop-up Amazon Marketplace stores, and especially of discount websites that they have never heard of before: they could be selling fake products, or scamming their customers. But customers trust large retailers like Macy's to sell legitimate products, and so are likely to take advantage of heavy discounts in department stores and outlets. To make matters worse, these large retailers are often some of your biggest customers: for Michael Kors, wholesale customers accounted for as much as half of their total sales. Manufacturers face a stark choice between allowing large retailers to damage their brand, or risking their relationships with some of their most important retail partners.

Michael Kors Decides To Clamp Down

In August 2016, Michael Kors opted for the latter. The company announced that it would begin clamping down on discounting practices at department stores. From February 2017, their products would be excluded from store-wide sales and store coupons, making it more difficult for retailers to sell them at a discount. When announcing the move, Michael Kors CEO John D. Idol said that the objective was to protect the brand's retail prices and exclusive image by reducing the availability of their products at discounted prices. The move came as part of a general strategy of reducing reliance on wholesale customers while increasing direct sales to consumers, a strategy that also includes the increased sale of exclusive products available only in Michael Kors' own retail stores.

A Net Gain Is a Win

The impact was immediate. In the first quarter after the announcement, Michael Kors lost 7 percent of its wholesale sales. However, sales directly to consumers through the company's own retail channels rose by 7.6 percent. Given that this occurred even before the changes came into force, the shift in sales patterns is likely to become much larger as department stores become more restricted in the discounts that they can offer. Effectively, Michael Kors has taken back more control of not only the price that consumers pay for their products, but also of the environments in which they are available for sale. Restricting wholesale customers' ability to discount doesn't only protect prices, it also prevents a luxury brand's products from being seen on the department store sale rack alongside less exclusive labels.

MAP Enforcement Even For Big Names

The lesson for manufacturers is to attach Minimum Agreed Prices to your products, and to enforce those prices even against large wholesale customers. Aggressive discounting by large, well-known retailers can be a far bigger threat to your brand than grey-market goods or pop-up online stores, and firms who want to maintain an upmarket brand image need to take steps to prevent that from happening.
back to blog
MAPCOP, LLC
51819 Danview Technology Court
Shelby Township, MI 48315
P: (586) 997-8010
Map Monitoring
How It Works
Features
Pricing
MapCop Blog
Try It FREE
Help
Log In
Forgot Password
Contact Us
FAQ